Galba was renowed for his avarice, and was also a sickly and uninspiring leader who gained no affection from the population of Rome.  The new emperor was soon in serious trouble when the army turned against him after he failed to pay the soldiers a promised generous donative.  Otho was also dismayed that he not been named Galba's successor and Suetonius wrote, “Disappointment, resentment and a massive accumulation of debt now prompted him to revolt." With the support and assistance of the Praetorian Guard, Otho masterminded Galba's assassination on 15 January, AD 69.

Otho was then proclaimed the new emperor.  He made a good start as one of his first acts as emperor was to appear before the Senate where he promised to “respect the people's sovereign will.”  He reinstituted gladiatorial games (which had been banned by Nero), rewarded the officials and soldiers who had helped him overthrow Galba, and restored the fallen statures of Nero and Poppaea.

Many sources (both ancient and modern) assume that Otho's wife - Poppaea Sabina - was the same woman that he had married ten years earlier.  This lazy assumption is perhaps understandable given that Otho was a minor and short lived Emperor, plus there was a lot of potential for confusion.  On his arrival in Rome, Otho had taken in Sabina and treated her as being his former wife of the same name.  Whilst there was no publicised wedding ceremomy, Otho left no one in doubt that Sabina was his wife and later Empress.

Sabina would enjoy being Empress again for only three months.  A new usurper had emerged - Aulus Vitellius - who been appointed by Galba as the governor-general of Lower Germany only a few months earlier.  Otho tried to reach a settlement with him, but instead Vitellius marched on Rome.  On 14 April AD 69 the rival armies fought the Battle of Bedriacum; after bitter and bloody combat Otho's army lost and two days later he committed suicide.  Vitellius continued his march on Rome, where he made a triumphal entry and was recognized as emperor by the Senate.

Vitellius now claimed all the possessions of the former emperor, which included Sabina.  By this time Sabina was universally accpted as a legitimate former wife of Nero, and a twice empress - including by Vitellius who needed to maximise the importance of his trophy. But unfortunately for Sabina the latest emperor was not looking for a wife who would help cement his position, but rather for a way to emphasise his power. 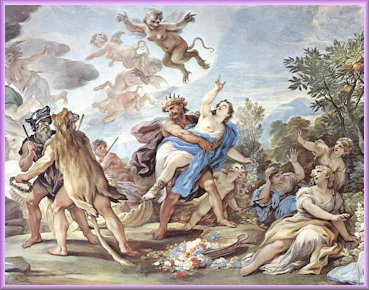 Vitellius decided to hold gladiatorial games to endear him to the population of Rome.  He or one of his courtiers must have recollected Sabina's infamous gift of a ring to Nero as he decided that the highlight of the games would be a re-enactment of the Rape of Persephone, with Sabina playing the female role of the maiden being ravished - with a brutal death very likely.  Upon learning of her planned fate, Sabina committed suicide by unknown means, age just 19 or at the most 20.

Vitellius soon became renowned for his cruelty, gluttony and huge unpaid gambling debts - and in turn would be dethroned, tortured and killed in December AD 69.

Sporus must have been an extraordinary person with a gift for enchanting men.  Despite being a male eunuch she was accepted as being a reborn "Poppaea Sabina" by two of her former husbands (both emperors) and another important official.  None seem to have regretted their decision to marry Sabina/Sporus, brief though the marriages were.

The story of Poppaea Sabina and Sporus has attracted the interest of many artists.  A few examples are below.